When I come from London to São Paulo my life becomes a gymkhana!! And since you liked the diary I wrote the last time, I took the chance to write another one now that I came to spend a whole month around here (surprised emoji…!) – a summary of what I did during the first 20 days, then when I return I complete it with part II 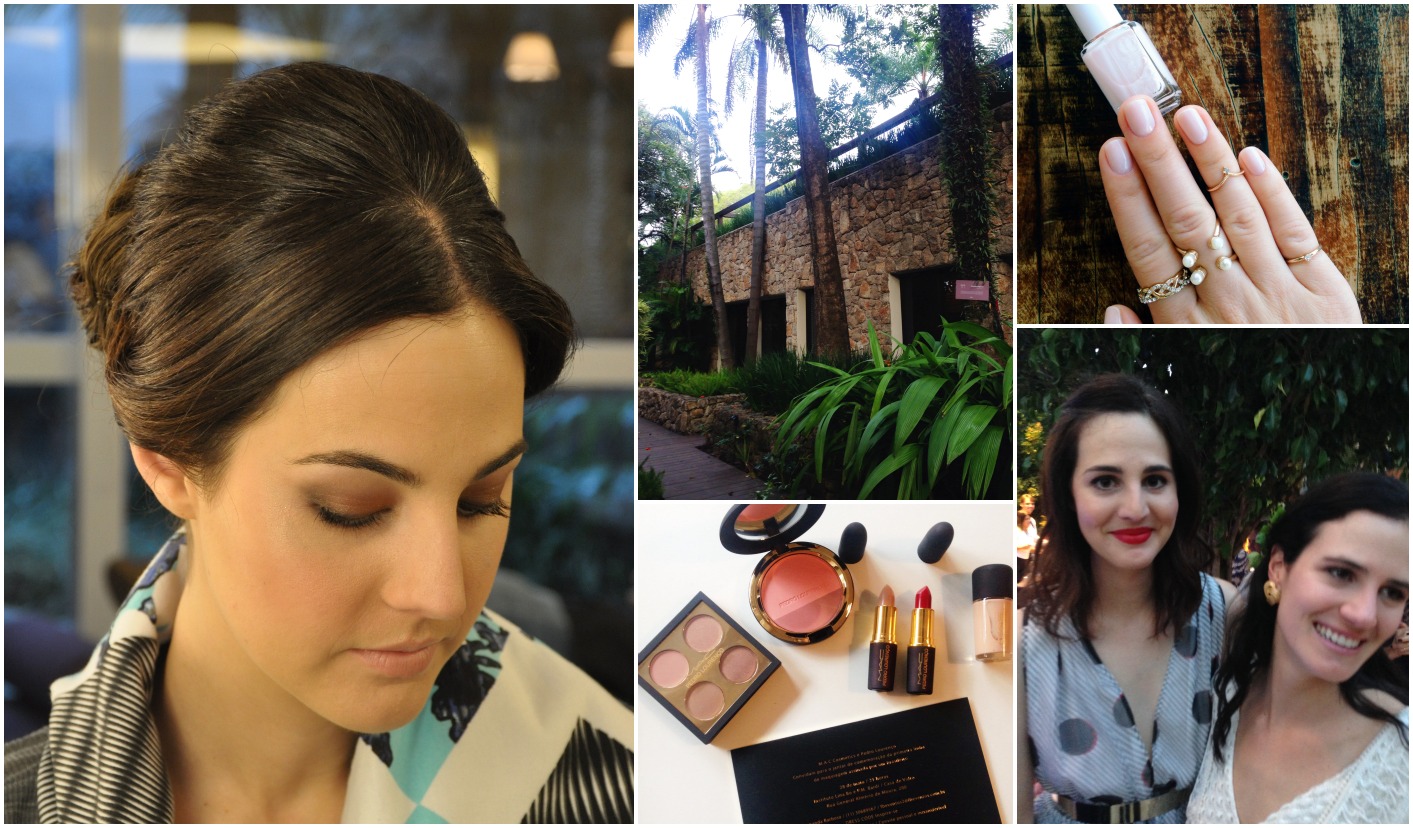 A summary of these days: weddings, a visit to Kennzur (best massage in the world), nice girl nail polish and launch of Pedro Lourenço for MAC

The reasons of my visits to São Paulo (so frequent that it doesn’t even seem that I live in London hahaha) are always very important weddings! This time I had Joana’s, one of my best friends, and my sister’s other two out of three – I commented about this “a thousand events” format on the other diary post, but I will say more about it below. But then, of course, once here, I work like crazy! With events, meetings, making of #DDBprojects (more about them here), I really feel like a dizzy cockroach – dizzy, but happy hahah! 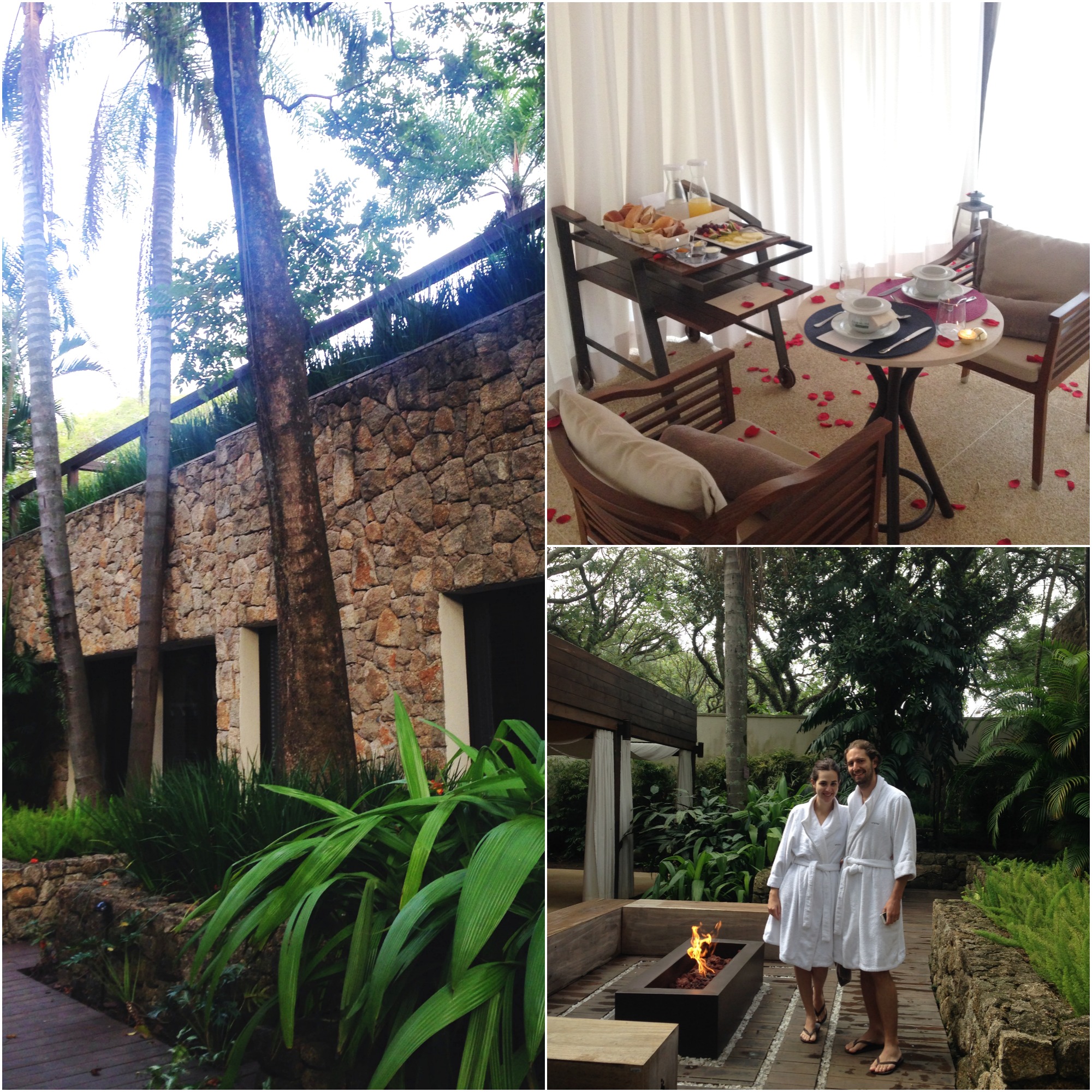 One of the first stops after landing: Kennzur, one of my favorite spots in SP – I spoke about this magical spa a few times (here, here, here), and it had been a while since I was able to pass by. When the girls asked me if I wanted to try the Valentine’s Day experience… I went running, of course! I recruited my husband (not very hard to convince) and there we went for the breakfast option – you can also do lunch or dinner – followed by 1h30 of a massage that practically makes you transcende!

I think the fault lies within the music and the fragrances that they use, something happens there that makes me always come out of there feeling like I’m in the clouds. And the breakfast was also super tasty, delicious ambiance and food… For the ones who don’t know yet what to give to their boyfriend, it’s a good idea. 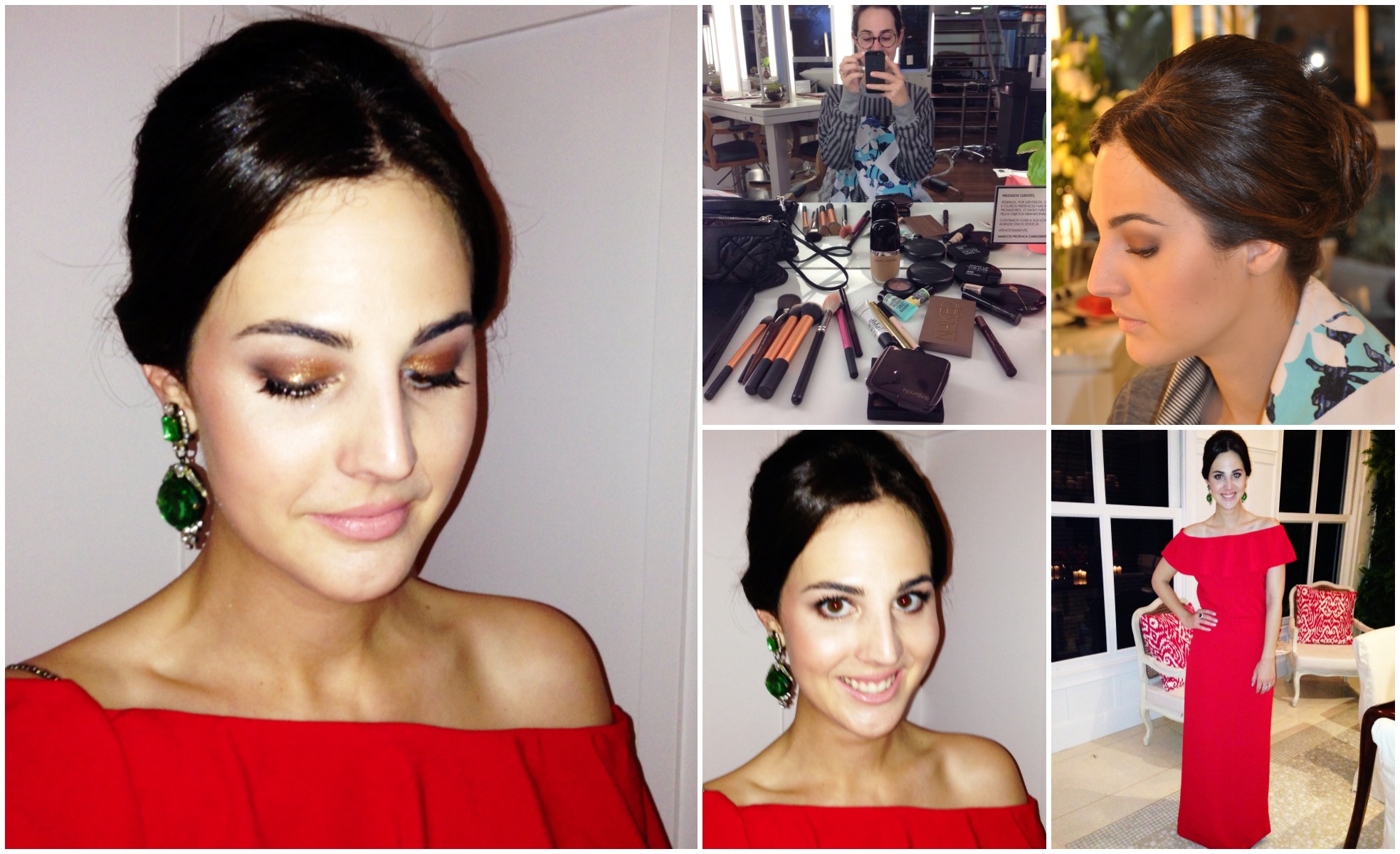 For the first wedding, my bff’s Joana, I did this bun that I wore already a few times – but I love it!! – with Proença. Low in the front, parted on the middle, volume and a full bun using a hair extension. Since the wedding was at the beach and I left SP very early, right after going to the salon, I optimized the time taking my things to do my makeup at Proença’s already. I used the Dolce Vita eye shadow quad by Charlotte Tilbury and did the golden smokey eye I already showed here. The lipstick is also by Charlotte, in Nude Kate, the dress is by Bless Couture and the earrings are vintage. 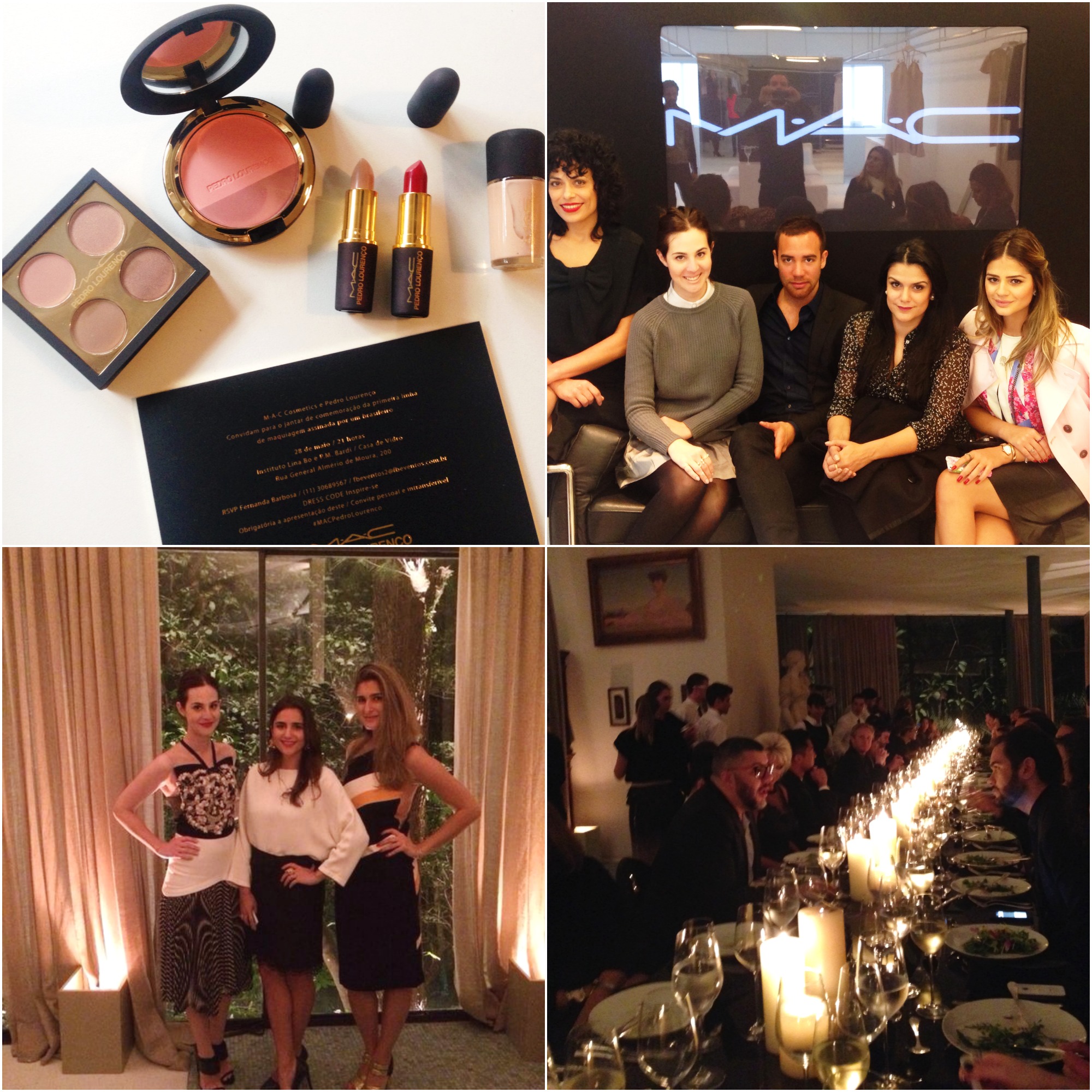 Another highlight of these season in São Paulo was the launching of Pedro Lourenço’s makeup collection for MAC. He is the first Brazilian to do a collaboration with the brand, and the products are beautiful, from the visual, black packaging with a chique velvet finish and with golden details, to the concept – nudes with a touch of color, like the lipstick in Ruby that is a version of the Ruby Woo but with an Amplified finishing instead of Retro Matte. And the neutral eye shadow quad that became something I’m loving right now. Online it sold out super quickly, but in the stores you can still find it easily, as in other countries, since they launched it globally.

I feel very close to this collection and to its history because I wrote the first article about it, for the March issue of Vogue (there’s a bit here), I followed the photo session for the campaign in Paris and I spoke to Pedro in several occasions… So it was very nice to be there for the launch, both in the morning for a chat with him, Fabi Gomes and the bloggers Marina “2 Beauty” Smith and Thassia Naves, as for the super chique dinner – even Karen Buglisi, MAC’s president attended. On the photos above: the products, morning chat, at dinner with my colleagues from Vogue Luiza Souza and Barbara Migliori and the table at The Glass House. 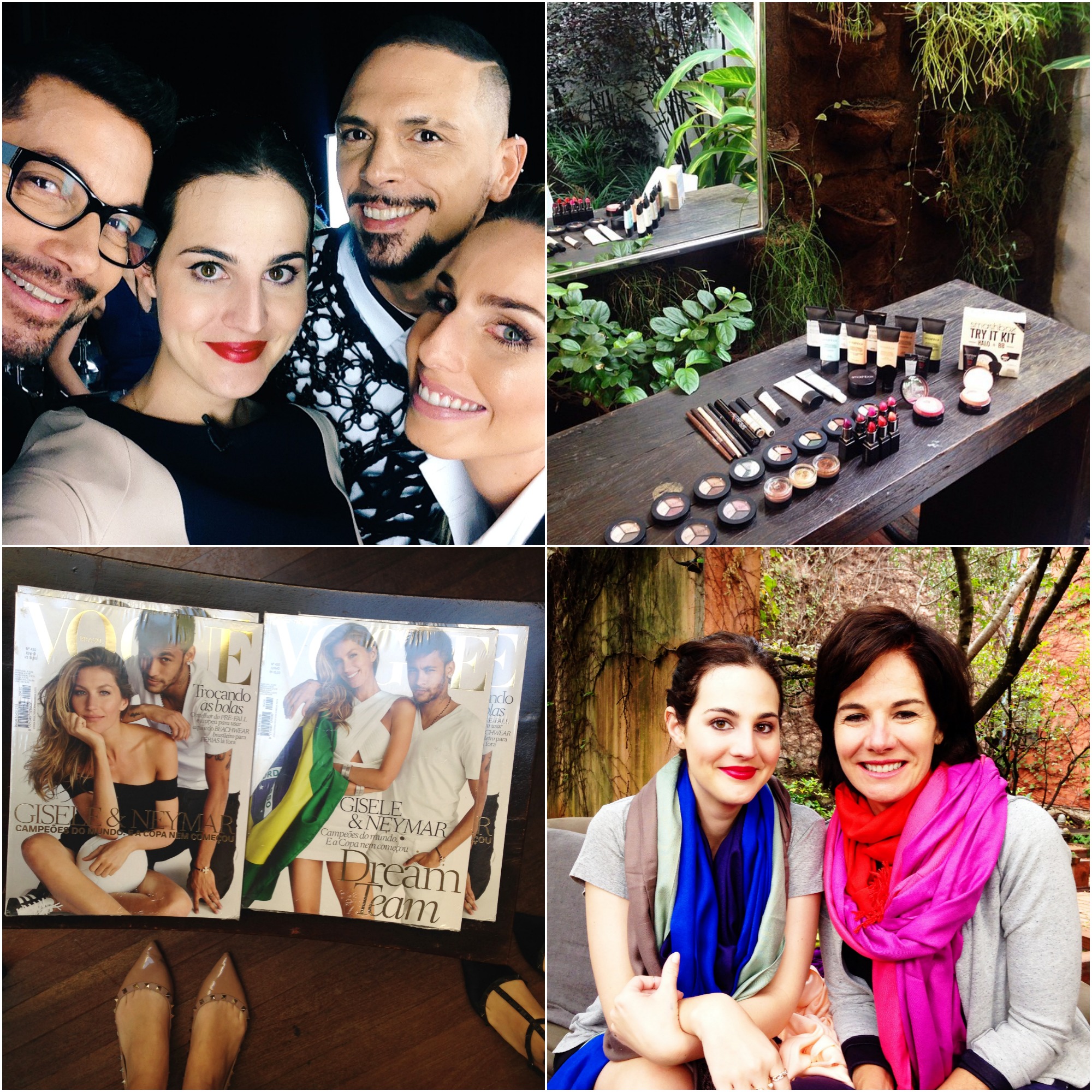 A lot of events and lots of work! I did a special participation on the third season of Desafio da Beleza, a TV show from the channel GNT with Fernando Torquatto, Ricardo dos Anjos and Mari Weickert – super! When it goes live I will let you know on DDB’s Facebook page, but it should be somewhere in August. I also took advantage of the time spent here to do some #DDBprojects videos with Smashbox (the first video is already here, the next one goes live tomorrow) and with MyBasic with my mom’s company (here)…. And, on a lunch with Vogue last week, admiring our covers for June’s edition with Gisele + Neymar 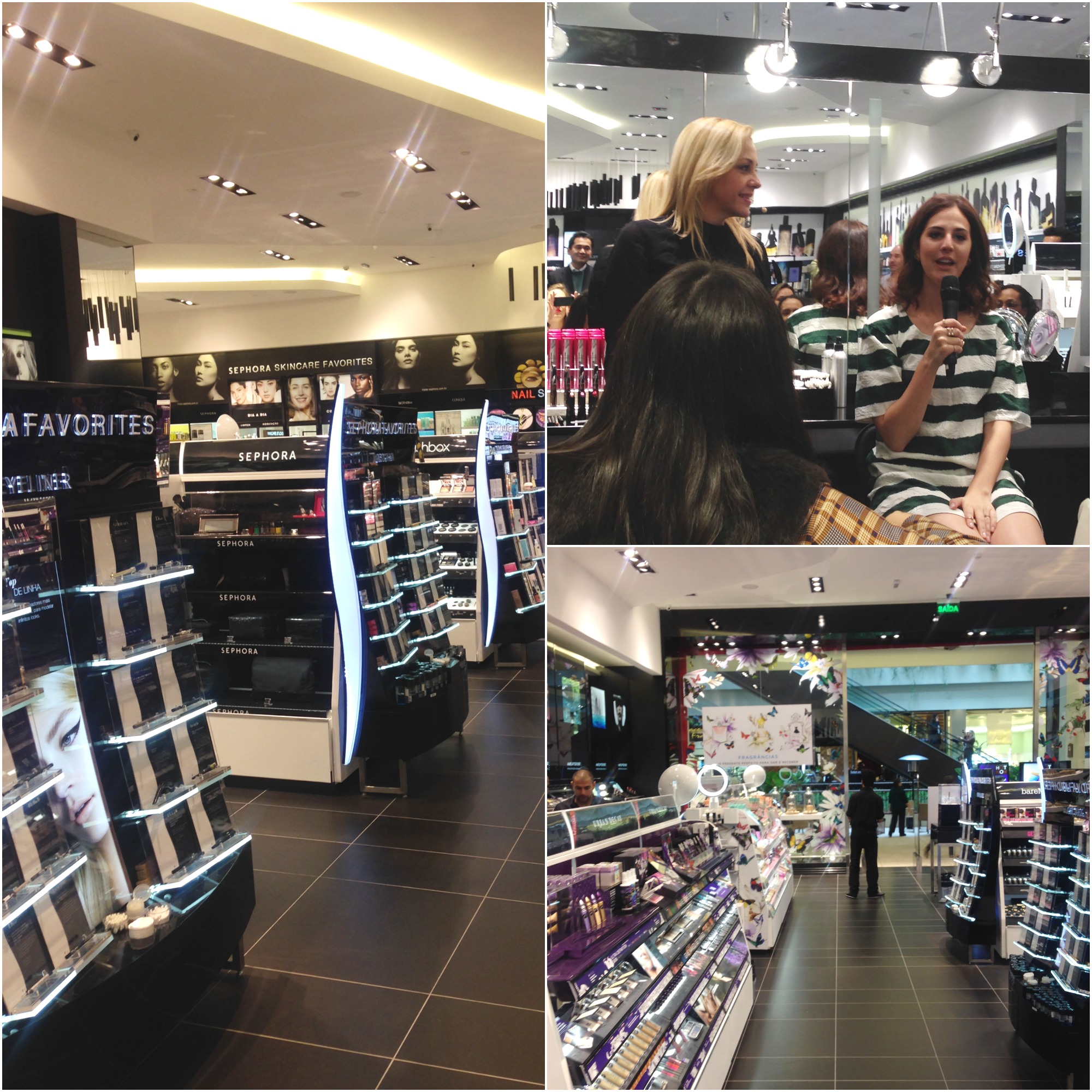 More work: an event at the Sephora of Cidade Jardim Shopping with bareMinerals – it was a live makeup class with Paloma, makeup artist for the brand… So nice! I loved the experience and already have wonderful plans to do other things like this through the whole country, I really want it to work out, let’s keep our fingers crossed! And this Sephora is something else, it opened a week ago and it’s their concept store in Brazil, with special furniture, a not so big space but with great navigation, I found it delicious – worth visiting! (Of course I have issues with Sephora’s, I never want to leave them hahah). Ah: we also did a video with the same class of the event, so the ones who couldn’t attend can also take advantage of the tops – it will be posted at any moment here on the blog hehehehe. 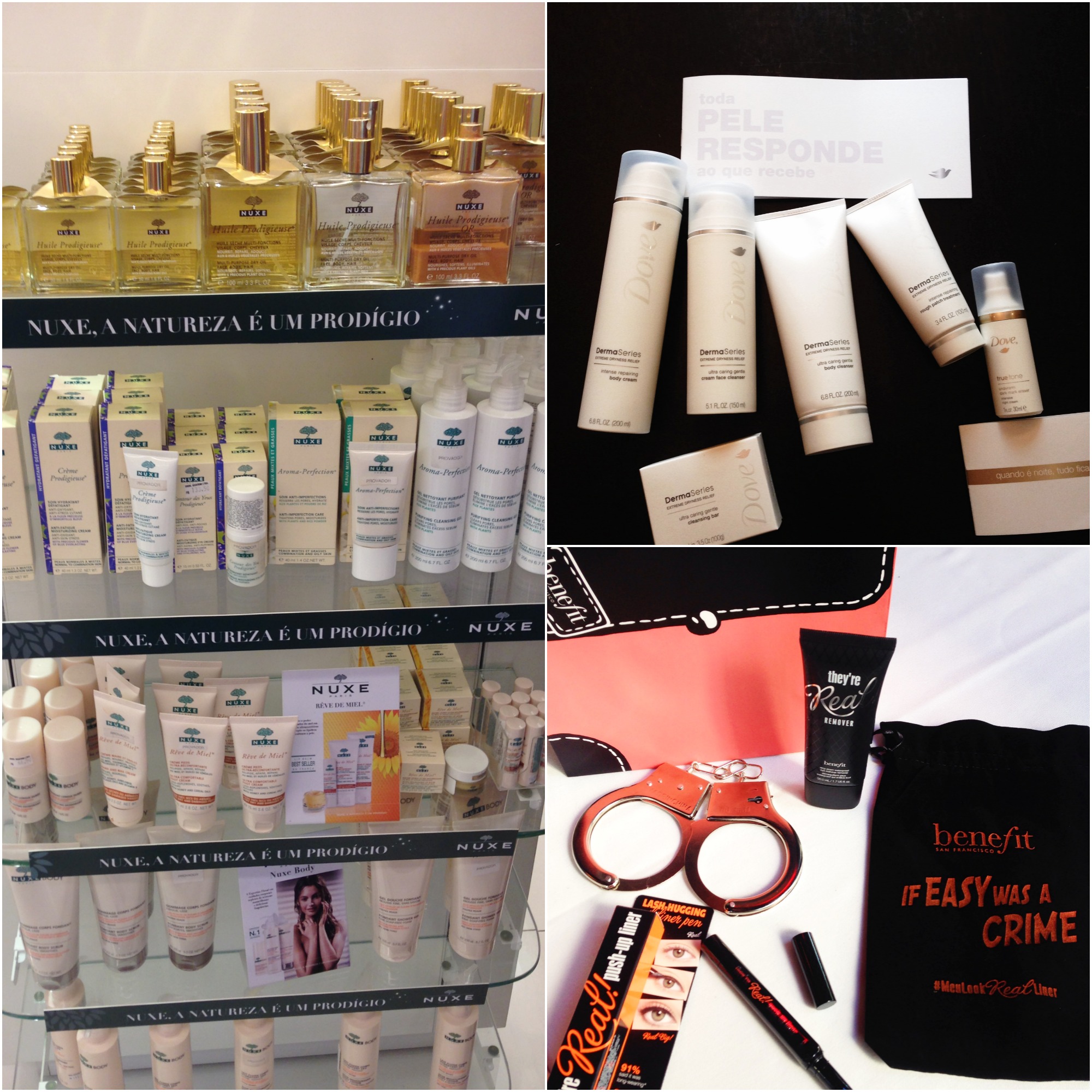 I always take the chance to meet press officers when I travel to SP and to get updated on the news… Lots of nice things: the arrival of Nuxe – I spotted it at the drugstore Drogaria do Iguatemi in Shopping Iguatemi and it was a bit emotional to see the brand here, I really love their products! I also liked Dove’s new project, they launched a premium line that has, in a first stage, a treatment cream to lighten the dark spots on the underarms and a line for super dry skin. I am looooving the shower cream, the body lotion and the cream for very rough areas, really effective and not heavy and sticky, you know? I promise that as soon as I get back to London I will make a random style video only with body and bath products, a lot of people asked me already.

I also got to know the super famous new eyeliner by Benefit, Real Push-up Liner, that took 5 years to be developed and that promises to be the product that will ease, once and for all, the life of the ones who want to wear a cat eye and can’t. The secret is the union of the easiest format (pen) with the friendliest formule (gel) and a super anatomic tip… I used it today and really liked it, I will show it in a video! It will be launched globally on June 27. Ah, the handcuffs on the photo are part of the press kit hahahah, part of the “if easy was a crime” joke. And there’s also the remover They’re Real, a cream that I found really powerful. 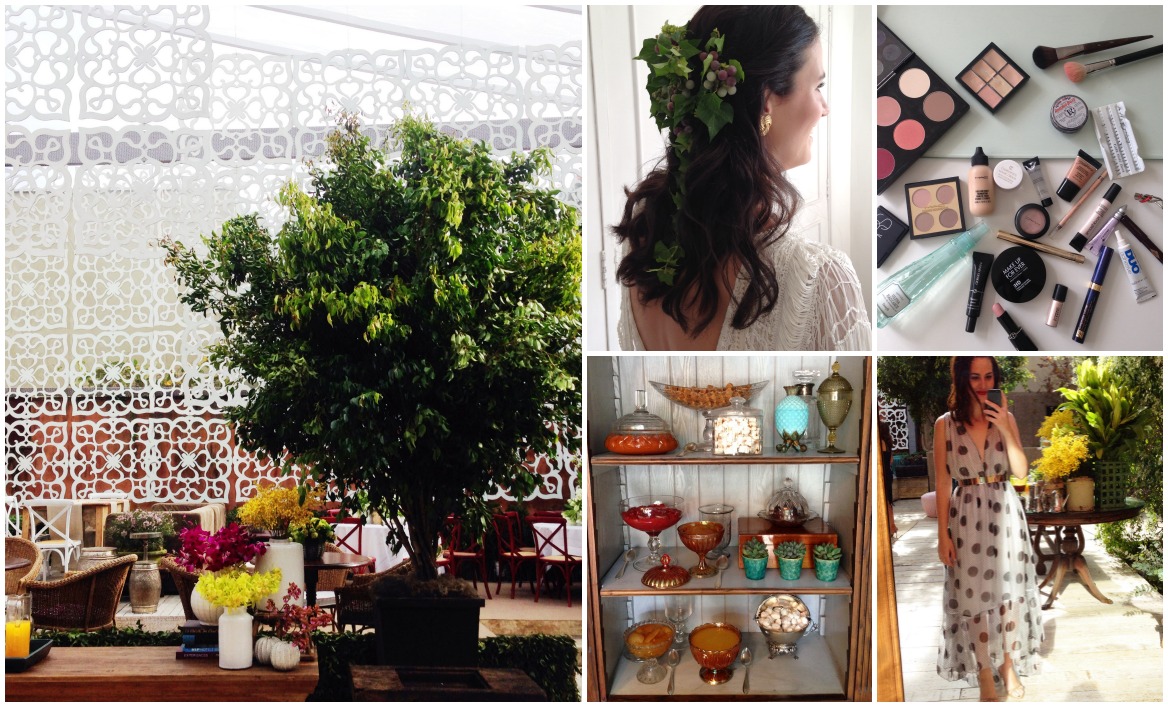 And another one of my sister’s weddings! I told before, but a lot of people asked so long story short again: when I got married, we did it in a format that worked very nicely going for two parties, one for the parents’ friends, the “adults”, and one for the bride and groom’s friends, the “youngsters”, all at my parent’s place. Lu is doing the same thing, but her boyfriend-husband is from Rio de Janeiro so they did the religious wedding at Rio in March… The one for the adults, in her case, was a delicious and super beautiful brunch also at my parent’s. The decoration and the idea for everything was, obviously, by Lu and mom Suzana, that own Bothanica Paulista and make the most beautiful parties of all (in my not at all biased opinion hahaha).

Lu had an arrangement made with leaves and grapes on her head that looked great (and the makeup done by me – when we have the official photos of the 3 weddings I will post it all), and I went with a polka dot dress by Bless Couture (again! My friend Aninha Albuquerque always saving me with beautiful clothes…), loose hair with babyliss curls and red lipstick. Non #fitness detail: instead of a sweets table, there was an entiiiire room of sweets, with a never ending sort of jams, cakes, rolls, hard candy, etc etc… Total ruin!! My mom will post on her blog, Cultivando Elegância, several details of the party. 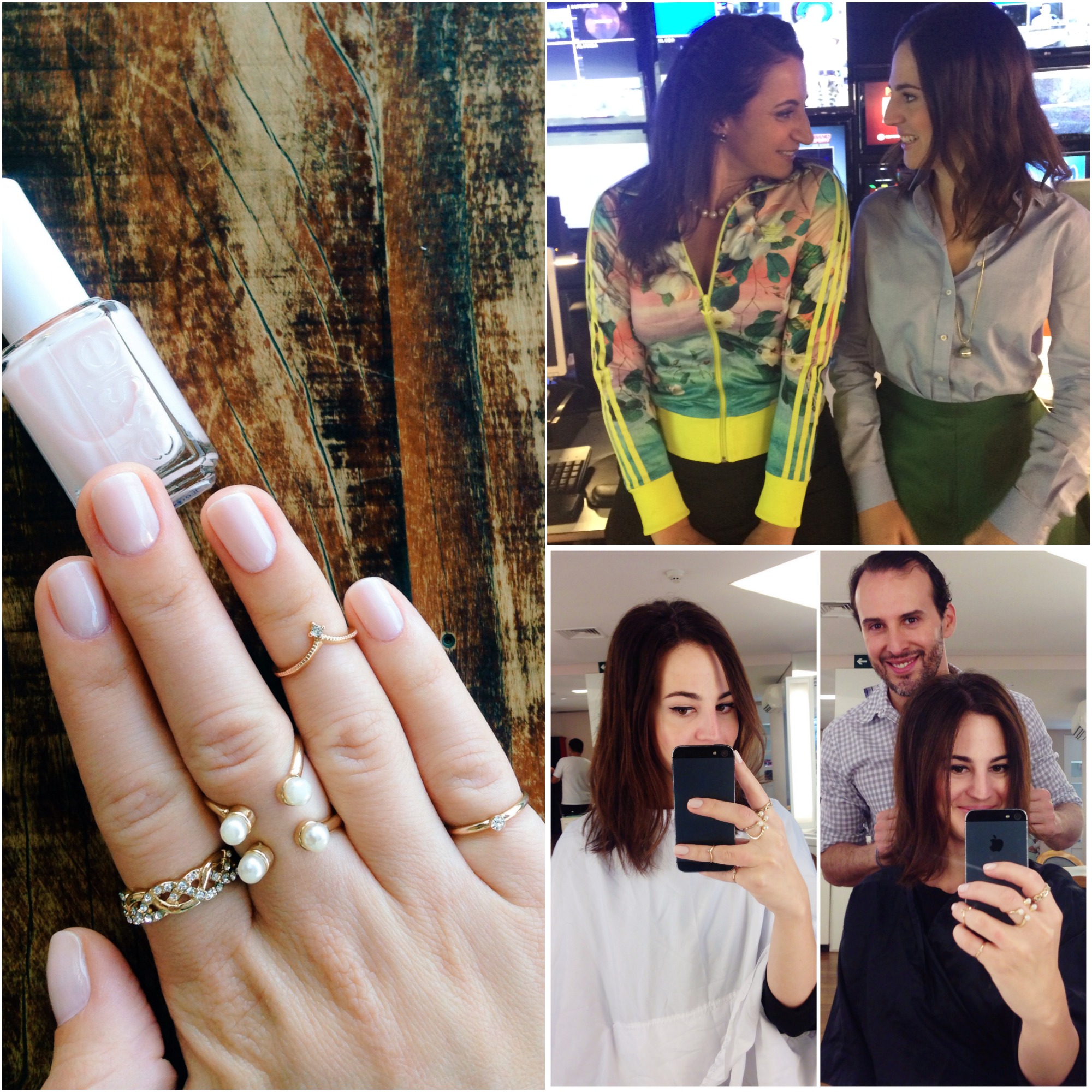 The latest (these posts always get huge!): nails with the nice girl nail polish in Ballet Slippers by Essie (and the Topshop rings that I’ve been wearing non-stop every day since I bought them, more than a month ago); new haircut – I got it today at Proença’s! I think it’s nice to leave the hair longer, but I don’t know why I always get that “rush” and feel like cutting it suddenly… Someone asked about the color on Instagram, I already gave the recipe for the color that I’ve been getting here in this post, it’s basically a brown to hide the treys and a soft shade of red to “warm” up the shade – but depending on the light it looks more red!

And to end, on studio with Ale Farah, my dear first boss (at Chic website!), for her TV show Moda e Negócios on Band News – it will be broadcasted next Thursday at 21h45, I will remind on Facebook when it gets closer to the day and then I will leave a link to watch the video online.