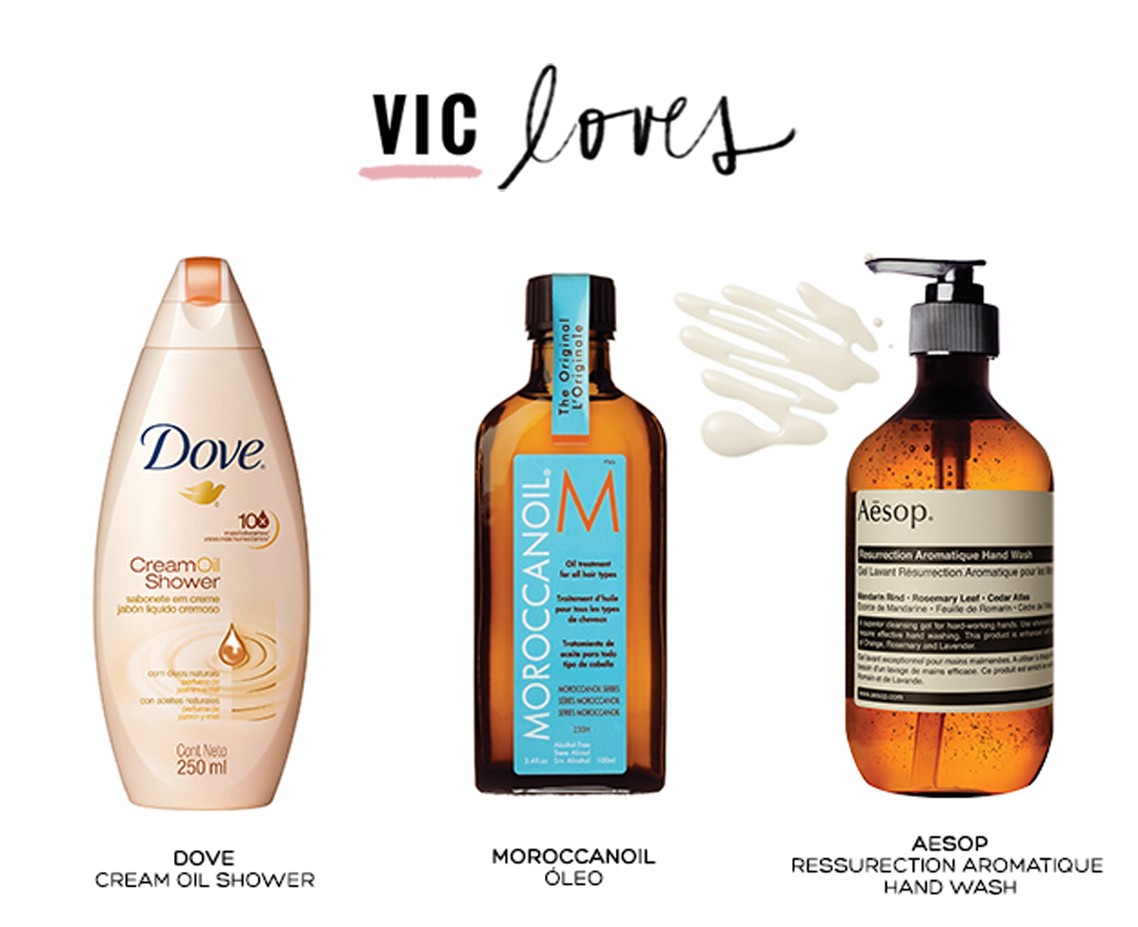 TO MOISTURIZE THE SKIN IN THE SHOWER

What: Cream Oil Shower
Brand: Dove
Why: I am feeling a bit repetitive for saying here on DDB that I am lazy to apply moisturizer – but the truth is that before moving to London, that didn’t made that much difference so it was ok… But now, with this crazy hard water in Europe, my skin gets very very dry and moisturizing really is something I need to include in my routine. You can imagine how much fun I have trying bath oils and moisturizers – no wonder there is one in most “Loving right now” posts. One that I am re-discovering now is Dove’s Cream Oil Shower, that I used in 2008, when it was released in Brazil, then I finished it and didn’t buy it again. It’s effective, moisturizes, has a nice smell and a friendly price – and there is also a mini version for sale (I buy it at Boots), great to take on trips.

TO SAVE THE HAIR

What: Moroccanoil Treatment
Brand: Moroccanoil
Why: I remember the first time I used Moroccanoil and the difference it made to my hair – especially on dry and split ends, a reality for the ones who straighten their hair like me. But then time goes by, you want to try new things and you end up not applying it for a long time. Well, in my “new London life” (you can see I am trying and re-using a lot of things in this stage) I re-gained my love for Moroccanoil. Since I have to take care of my hair on my own much more now, unlike before when I practically lived in the salon, the oil is becoming my best friend because it really leaves the ends prettier and organized, and the hair very soft. I apply it on towel-dried hair after washing it, then I blow-dry my hair and proceed with the curling or the flat iron.

TO WASH THE HANDS

What: Ressurection Aromatique Hand Wash
Brand: Aesop
Why: If you saw the size of this bottle, you would think I am crazy for carrying it in my bag. But that was exactly what happened to me the first time I bought it – I already had the hand cream with the same fragrance, and on a trip two years ago I couldn’t resist and brought the big bottle home. I got addicteeeeeed, on the smell, half fresh, half lavender… super in a “I believe in aromatherapy” style, I am sure that washing my hands with it makes me happier hahah. Now I always have it at home, but at least now that I am living in London I don’t need to carry it in my bag anymore eheh. Do you know Aesop? It’s a super nice Australian brand, known for their eco products, their packages that resemble old pharmacy packages (LOVE IT) and also for their beautiful stores – they never look the same and the brand always calls top architects from the country where they are building the store to design it, so it’s good to include them on your “beauté tourism” guide for your next trip (here are all the stores/cities).